The membership of the Research Data Service Virtual Team across four divisions of IS was confirmed and met for the first time (to replace the former action group meetings) on 11 February where it was agreed meetings would be held approximately every six weeks for information and decision-making.

In February, the DataShare metadata was mapped to the PURE metadata and staff in L&UC and Data Library trained each other for creating dataset records in Pure and reviewing submissions in DataShare. It was agreed that staff would create records in Pure for items deposited in DataShare until the company (Elsevier) provides a mechanism for automatically inputting records into Pure.

In March, Jisc announced that the University of Edinburgh was selected as a framework supplier for their new Research Data Management Shared Service.

A review of the existing ethics processes in each college is in progress with Jacqueline McMahon at the College of Arts, Humanities and Social Sciences (CAHSS) to create a University-wide ethics template. There is also engagement with the School ethics committees at the School of Health in Social Sciences (HiSS), Moray House School of Education (MHSE), Law and School of Social and Political Science (SPS) in CAHSS.

The Research Data Management and Sharing (RDMS) Coursera MOOC opened for enrolment on 1 March 2016. This was completed in partnership with the University of North Carolina-Chapel Hill CRADLE project. Research Data Management and Sharing (RDMS) MOOC stats from the Coursera Dashboard reveal that as of 23 May 2016, there have been 5,429 visitors and 1,526 active learners; 335 visitors have completed the course.

Four PhD interns were hired in mid-March to act as College representatives for the IS Innovation Fund Pioneering Research Data Exhibition. They will be employed until mid-December 2016.

A total of 363 staff and postgraduates attended RDM courses and workshops during this quarter.

There were 30 new DMPonline users and 55 new plans created during this quarter.

There are now 210 dataset metadata records in PURE.

A total of 56 datasets were deposited in DataShare during this quarter.

As part of my responsibilities to cover the one year interim of Kerry Miller’s maternity leave, I will be writing blogs for this page until Kerry returns next summer.

Prior to this post, I worked the past 12 years as the geospatial metadata co-ordinator at EDINA. My primary role was to promote and support research data management and sharing amongst UK researchers and students using spatial data and geographical information.

Last week, members of the Data Vault project got together for the kickoff meeting. Â Hosted at the University of Manchester Library, we were able to discuss the project plan, milestones for the three month project, agreed terminology for parts of the system, and started to assign tasks to project members for the first month.

Being only three months long, the project is beingÂ run in three one-month chunks. These are defined as follows:

At the end of month three, we will prepare for the second Jisc Data Spring sandpit workshop where we will seek to extend the project to take the prototype and develop it into a full system.

All of this is being documented in the project plan, which is a â€˜living documentâ€™ that is constantly evolving as the project progresses. Â The plan is online as a Google Document:

Look out for further blog posts during the month as we undertake the definitions and investigations! 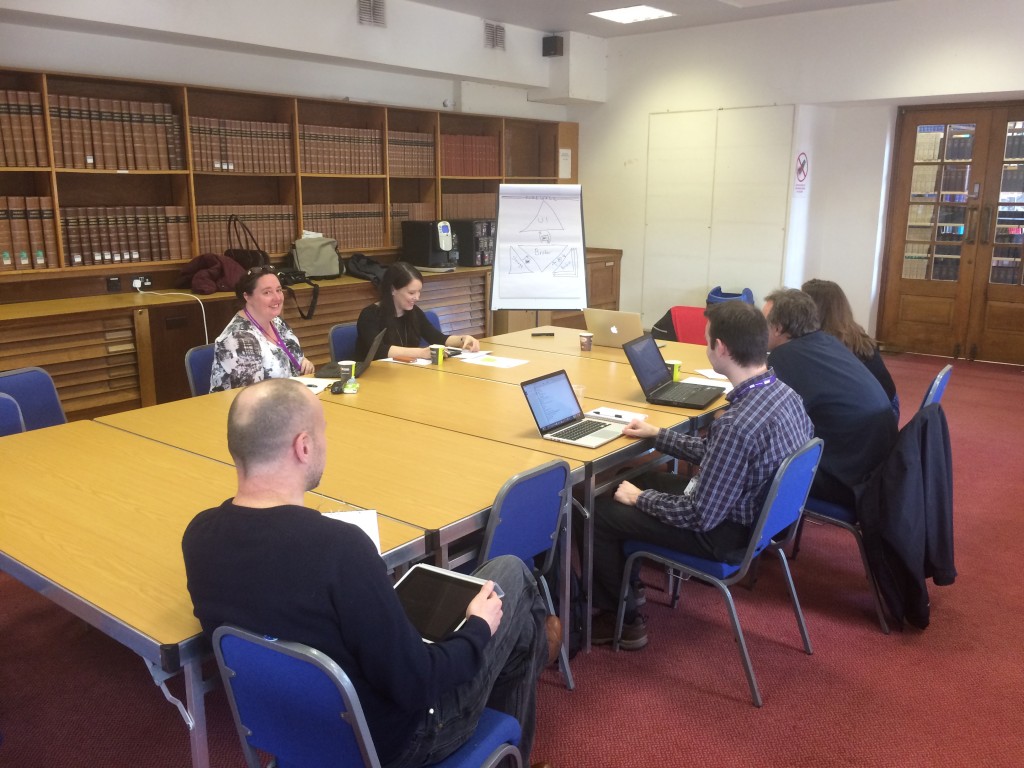