Over the next few weeks we will be running a programme of webinars covering updates to Digimap, Global and Society Collections and the Ordnance Survey Northern Ireland data, including how you can access these new services. A separate webinar to discuss and answer any questions on data licences will also be scheduled. The first webinar […]

SUNCAT has been updated. Updates from the following libraries were loaded into the service last week. The dates displayed indicate when files were received by SUNCAT.

#Outdoorclassroom day is on the 23rd of May this year. It comes at a particularly apt time as we see the huge positive wave of young people getting involved in activism to highlight the environmental crisis our world is in.

Digimap for Schools is a fantastic resource for planning and delivering these outdoor classrooms. Our maps can be used to create risk assessments and plan activity locations for the day. It can also be used to show the changes that have happened in you schools location over the past 130 years using our historical maps. The aerial imagery can be used with Ordnance Survey maps to give pupils a sense of place and explore their local area and environment.

We also provide lots of free resources to assist and guide your day. These outdoor education resources are available here: https://bit.ly/2DI0zcA

This resource (above) for example is great for getting pupils to do some biological monitoring and understanding the importance of the species in our environment.  This resource was developed for the Scottish Curriculum for Excellence but is also perfect for any KS2 activities in England and Wales.

All Digimap users currently have free access to Global Digimap until 31st July 2019 as a trial.  We hope you like this new service.  If you would like to learn more about the OpenStreetMap data, it’s origins and history, from someone who is more than qualified to tell the story, Steve Chilton is giving a […]

We held a couple of webinars on Wednesday 17th April for people to come along and see what we’ve been up to. If you weren’t able to make one of the sessions, or you’d like to review what you heard, here is the recording of the second session: 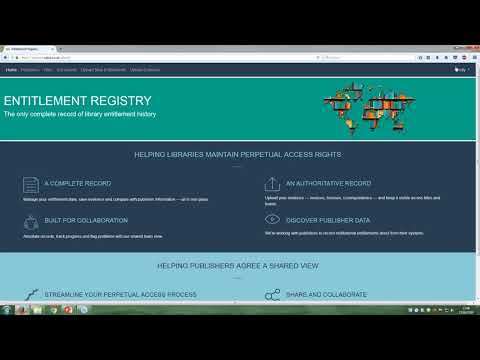 We’ve also put together a FAQ document to cover the questions that were raised across both sessions: Entitlement Registry Webinar FAQs

It’s worth noting that the information in the webinar and FAQ was correct at the time they were created, but we’re constantly making changes and updates to the Entitlement Registry. If you’re looking at this in May, much may have changed!

Additionally, we’re pleased to confirm that our beta service will be going live in May, and we’re looking for beta testers. Beta testing will involve uploading your entitlement data to our platform and providing feedback to us on various aspects of its performance.

Our beta testing phase will allow us to assess the uptake, benefits and drawbacks of our approach to entitlement logging. Librarians will be able to upload, store and reference both locally produced records and those downloaded from a publisher.

Strong community uptake will help demonstrate strong library demand and urgency for publisher participation and, in parallel to this beta activity, we will continue to negotiate with publishers to articulate and reinforce the strong demand we hear from the library community.

Stay tuned to this blog, as we will be bringing you behind-the-scenes information and keeping you updated on developments.

Please let us know at edina@ed.ac.uk if you’d like to get involved in beta testing, or if you would like more information.

2019 is the 200th anniversary of the death of a number of contributors to the Old Statistical Accounts. This provides a perfect opportunity to discover those who wrote the actual parish reports at the end of the 18th century and so learn about the people behind this great resource.

Below is a guest blog post written by John Moore, an independent researcher, focusing on the writer of the parish report of Borthwick, County of Edinburgh (OSA, Vol. XIII, 1794, p. 622-639), the Reverend John Clunie.

This month sees the bi-centenary of the death of the Reverend John Clunie (1757-1819), minister of Borthwick from 1791 until his death and author of the parish entry in the Old Statistical Account. Clunie was licensed to preach by the Presbytery of Edinburgh in December 1784 and was a schoolteacher in Markinch for a while. His first charge was at Ewes parish before he moved to Midlothian. He had a reputation as a fine singer and led his congregation as precentor in his church at a time before organ music accompanied services. He wrote a version of the Scots song ‘I lo’e na a laddie but ane’ and his reputation as a song-writer led to an acquaintance with Robert Burns, who described him as ‘a worthy little fellow of a clergyman’. During his time of office, Clunie served as Chaplain to the Eastern Regiment of the Midlothian Volunteer Infantry. He married Mary Oliphant, daughter of the minister of Bower in 1790 and his son, James, subsequently became commandant of Moreton Bay Penal Settlement in Australia between 1830 and 1835.

Published in 1794, his extensive description of Borthwick states that ‘the air is pure; the inhabitants in general are healthy, and subject to no particular local distempers.’ (OSA, Vol. XIII, 1794, p. 623) He notes that the six leading proprietors, who would have been the parish heritors, owned nearly half of the property. In discussing agricultural improvement, Clunie mentions James Small of Ford, the best plough-maker in Scotland who produced up to 500 ploughs in a year and introduced a superior cast-iron version of this important farming tool. Like many other accounts, the author mentions ale-houses ‘which are by no means favourable either to the health or morals of the inhabitants.’ (OSA, Vol. XIII, 1794, p. 627) Having been a teacher, Clunie also provides much detail about the parish education and the ‘sort of genteel starving’ faced by the local schoolmaster. (OSA, Vol. XIII, 1794, p. 628) The Account estimated the parish population at 858.

Borthwick Church stands in a dominating site close to Borthwick Castle, which Clunie describes in his account. The east part of the building is substantially medieval with a 12th century apse and the 15th century Arniston Aisle. Medieval fabric survives inside, notably the magnificent Borthwick tomb and pre-Reformation piscina. Clunie’s account relates that the old church suffered a serious fire in May 1775 and was rebuilt three years later. The church continues to serve Middleton, Borthwick and the surrounding area.

We would like to thank John for this guest post. Look out for the next installment in May!