The materials we have been scoping for the Will’s World registry seemed like a fantastic potential data source for this event, particularly given that it was taking place in the week of the 448th anniversary of Shakespeare’s birth.  We got in touch with the CHS team and after a bit of discussion about what might be appealing to CHS developers and what could be delivered in the time available, it was decided that we would be an official Data Partner for Culture Hack Scotland 2012 providing a marked up version of Macbeth. This would be the full text provided in XML and included various valuable additions to the data that would enable a greater array of possibilities for creative use of the text and/or aggregation with further resources.

Is this a data set I see before me?

Around a week before the event we were able to provide a link to a new data page containing the full text of Macbeth which had been beautifully marked up, including details on characters and locations (including lat/longs added through Unlock), prepared by our software engineer, Neil Mayo. Our colleagues from the Statistical Accounts of Scotland and JISC MediaHub services also made their metadata available (linked from the same page) to enable CHS participants to connect the play to related resources such as historical notes on counties mentioned in the text, or video recordings of key performances.

We sent off the data and it was featured in the weekly update for announcing data provided for the event. There were four of these Data Thursdays in all offering a staged announcement of all of the CHS data, each one announced with the release of data slices enabling developers to have a look and a play with the data ahead of the event. The last Data Thursday included a fantastic mention for the Macbeth data and, as it went live, all of us in the Will’s World team took a deep breath and nervously crossed our fingers that someone would be taking a look, having ideas, and, hopefully building something fantastic…

Friday evening saw the kick off the event and the gathering of around 100 people including developers of all types, designers, artists, musicians and data owners for the kick off of Culture Hack Scotland.  The event opened with an introduction from the Culture Hack Team and an inspiring pair of talks from James Stewart, Technical Architect for data.gov.uk and Brigitta Zics, Head of Digital Media / Convenor of Creative Digital Practice Group for Culture Lab at Newcastle University.

As the evening continued all hack participants were encouraged to share any early ideas they might have to get conversations going and teams forming, and we were delighted to hear at least one possible Macbeth project emerging right away. As the event moved into the team formation and hacking time it became clear that several projects were really excited about the idea of working with the Macbeth data. A number of developers who were looking at working with Macbeth complemented the quality of the XML we had provided for CHS making us ever so proud and extra excited about the possibilities for using this data.

The night has been unruly where we lay

The true business of hacking only really kicked off late in the evening but by midnight a hardcore team of hackers were working, in teams or alone, on a range fascinating ideas and projects. At the 2.30am catch up – a meeting with a lot of coffee and around 30 committed CHS hackers – it became clear that some really creative work was underway: one team had taken a pair of old skinny jeans and were in the process of using Arduino hardware to create a very alternative way to experience The Skinny magazine’s arts listsings; a mobile developer was creating a new interface for Glasgow Museum’s Zoology collections data; one team had already finished a map interface for crowdsourced stories. However for the Will’s World team the most exciting thing was finding out about three projects who had decided to work with the Macbeth data in very different ways: one focusing on the emotions of the text; one building an interactive game; and one looking at how Macbeth and social media could be combines. Indeed Nicola Osborne, who was along at the hack representing Will’s World and EDINA, had gotten involved in one of these projects by creating some Monty Python-esque illustrations for the interactive game team.

CHS participants carried on working through the night, sustained by never ending supplies of coffee, chocolate and fruit. A few naps were taken but by early Saturday morning – when this CHS piece featuring the Macbeth data appeared in The Herald – even more teams were working away as those who could not make the Friday began to appear, full teams gathered after sleeping in shifts, and the final push to finish off ideas and hacks got under way.  The submission deadline for hacks was 4pm ready for a show and tell session of epic proportions with some 29 presentations of over 35 hacks waiting to be showed off.

When shall we three meet again

In the end a total of three teams had worked with the Macbeth XML. They were: 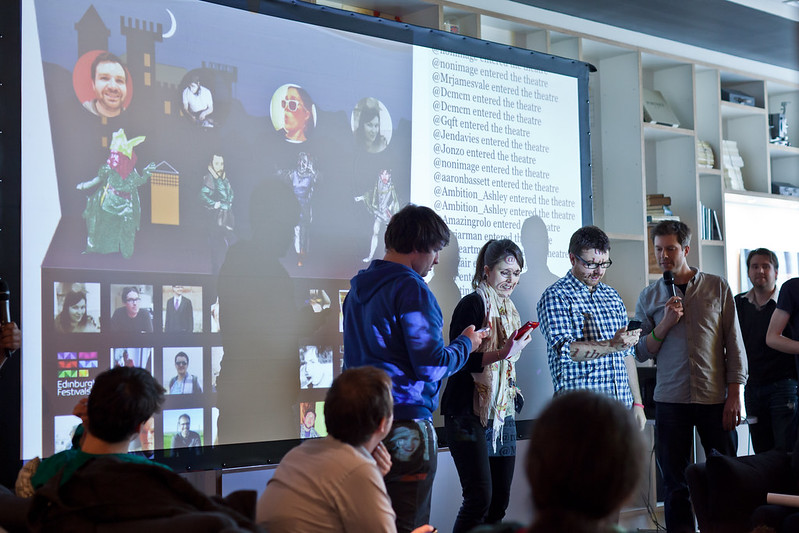 The way that Shakey App works is that players login and randomly assigned a part to play. They are then prompted with the lines via their phones and the audience around them (who also have to be logged in) can then vote on the best and worst performances by virtually hurling tomatoes in horror or throwing flowers in appreciation. It was demoed live at CHS as pictured above and you can read a full write-up  or take a look at the code for the project.

Colouring Macbeth In a Glass Case Of Emotion

Douglas Greenshields (@bedroomation) created this inventive exploration of the Macbeth text through the emotions of the text. The user is presented with a number of extracts from the play and asked about the one that feels most… something… that might be “fearful” or “angry” or “loving”, etc. Each of those emotion questions is coloured a certain way, fear might be green for instance. When you click on the extract that is the most of that emotion the text is coloured appropriately and over time the system builds up an idea of which scenes connect emotionally, how the readers emotion is reflected in their marking up of the text, etc. Click through to the Colouring Macbeth In a Glass Case of Emotion site to have a go and read Douglas’ account of what he has created to find out more.

The team of Marius Ciocanel (@MariusCiocanel), David MacKenzie and Minka Stoyanova decided to create their own Twitter client pulling in the Macbeth text as tweets from each of the characters. “Tweets” are timed to come in at a great reading pace and you can use buttons at the top of the page to switch between scenes.

These projects gave us some fantastic opportunity to think about some really creative uses for Shakespeare data and metadata and we were pleased that colleagues from the Royal Shakespeare Company, who are currently running the incredible World Shakespeare Festival 2012, had also been able to make it to the CHS Show & Tell and see these projects showcased.

We were inspired not only by the Macbeth projects but also by the other hacks showcased at CHS as there were some fantastic ideas from music made from footfall data to ambitious games built from poetry – full details of all of the projects created at the event are now available on the Culture Hack Scotland site.  Chatting with developers and designers throughout the event and at the Show and Tell highlighted some really useful reflections and comments around the need for quality data and the opportunities and challenges of aggregating large data sets. We will certainly be bearing in mind those perspectives as we move forwards.

Is that my prize?

Once all of the projects had presented at the Show & Tell the judging took place. We are delighted to say that Shakey App, built on the Will’s World Macbeth data, was awarded the honour of Most Playful Hack and went on to take the Overall Grand Prize Winner!

The team behind the Grand Prize Winner Shakey App.

Now that Culture Hack Scotland has been and gone what happens next?

Well we plan to keep the Macbeth XML available and would love to see any new ways to hack/use/create things from any of the data we made available from CHS. The page will remain live and we will be adding some additional data that complements the Macbeth XML shortly. If you do decide to create something new we would love to hear about it – leave a comment here or drop us an email us via edina@ed.ac.uk. 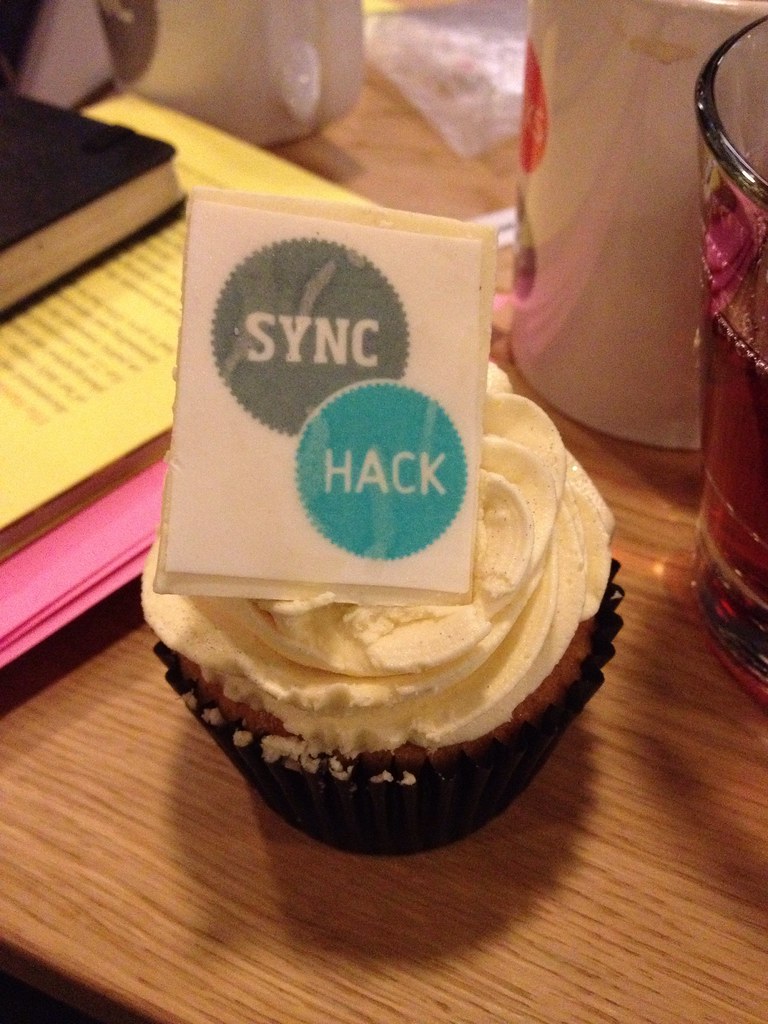